Shower caps aren't just for your granny anymore. While we normally think of them as crinkly, flimsy, and utterly unattractive, Jacquelyn De Jesu has designed a shower cap that is the complete opposite. After identifying all the things that are wrong with the traditional shower cap (poofy, not cute, and your hair still manages to get wet) De Jesu's SHHHOWERCAP offers a much-needed update. We sat down with her to discuss turning an innovative idea into a physical product, entrepreneurship, and designing with sass.

Theresa:  From a design perspective, what were your biggest goals when developing SHHHOWERCAP's packaging?

Jacquelyn De Jesu: Similar to many people reading this, I truly value design. I appreciate it in every aspect of my life—whether it is a toothbrush or a pair of socks. I like things that work how they they say they will and look beautiful while doing so. SHHHOWERCAP was built on those same principles. It is my mission to change perception of the entire category through the power of design. We are disrupting the category by being a shower cap that is (actually) chic, sophisticated, modern, and cool. Shower caps have forever been the epitome of embarrassing and tacky design. Because of those preconceived notions, everything we do at SHHHOWERCAP actively fights against that expectation. Packaging obviously being one of the most important pieces for that communication! It was so important to me that we nailed this. It needed to accomplish a lot. Educate in all of the ways this product is different, be super luxurious in the weight, "pop" at shelf, and represent who we are as a brand. All while staying true to our aesthetic which is graphic, minimal, and super clean.

Theresa: What resources were particularly helpful for you in making your concept for SHHHOWERCAP a reality?

Jacquelyn De Jesu: Google!!! I always credit the city of New York for helping me make this dream come true. The people. Who knew people, that then connected me with another person, who would point me in the right direction to someone else they knew, who could eventually give me the answer. There was A LOT of that during development! And I think that is a testament to the city's culture. The proximity to The Garment District was such an asset as I picked fabrics, trims, and made iterations of the very first prototypes in cut & sew sample rooms.

Theresa: In regards to developing SHHHOWERCAP, how did you work to make this product everything you needed it to be?

Jacquelyn De Jesu: A lot of trial and error. And pivots. I was creating a product that I felt was missing. Because of that, I was able to be my own "client" and I had the ability to trust my gut on a lot of things. I also spoke to anyone and everyone about their hair habits and shower caps. What they loved, what they hated, if they used them, and why (specifically) if they happened not to. So many things worked their way into aspects of the final product! 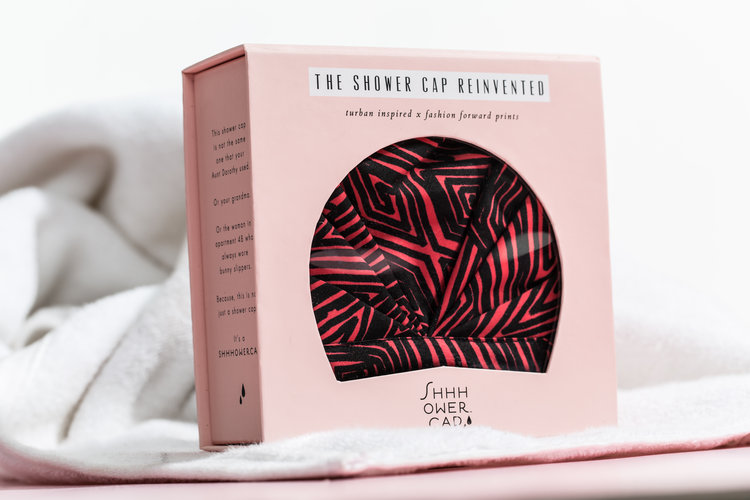 Theresa: What is your favorite element of the packaging and why?

Jacquelyn De Jesu: The little details. On the back it says "Designed with sass in Brooklyn, New York. TELL ALL YOUR FRIENDS." Which shows our brand's personality, but it also feels really personal because it is something that I always say. The fact that my husband, Alex Center, worked on bringing it all to life. Perfect example. There had to be a way to represent the unique turban shape. But, I absolutely refused to include an illustration or any photography on the box. It was a very tough brief. I'm pretty sure any other designer would have killed me. I thought his solution of the diecut window was so brilliant. I love how the pleated detail of the cap itself sits perfectly front and center. Even our factory loves folding and packing them up because of that!

Theresa: What has been the best and the worst part of launching your own product?

Jacquelyn De Jesu: The best part is definitely the ability to create something that I felt the world needed.....and then have the world respond with, "Yep. We did need that." I feel truly fortunate and humbled by the response since launch. To know that we are in bathrooms all over the world still blows my mind. The worst aspect? I'd say having to manage the highs and lows. It sounds cliché, but it truly is a rollercoaster ride. The wildest and most exciting one you could imagine. 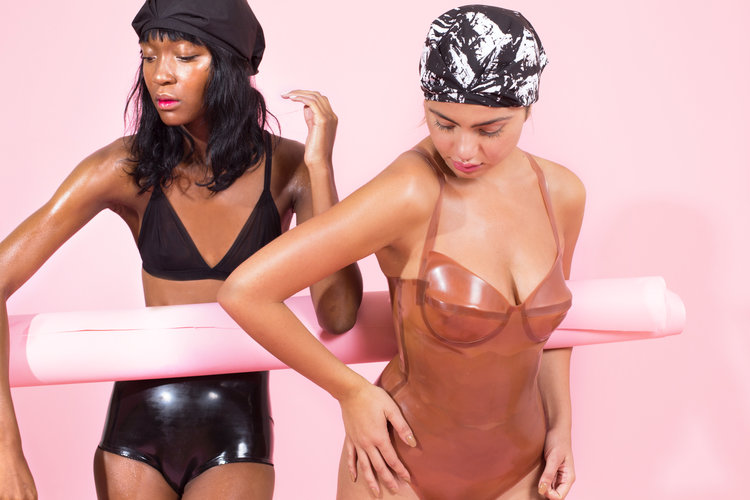 Theresa: How do you feel that your work as an advertising art director has helped you as an entrepreneur?

Jacquelyn De Jesu: All the ways! As an art director, it was my job to come up with ideas, make them pretty, and then get people to say yes to it. That is still what I do for SHHHOWERCAP every day—just on a much larger scale in a million different ways. I have to work extremely well under pressure and pitch pitch pitch pitch pitch. As an entrepreneur I'm always pitching! Whether its directly to a chick sharing my Uber pool or a buyer from a major department store. That is a skill I honed during my years in advertising. Also, of course, it doesn't hurt that I can jump in and help comp things up when we need to!

Theresa: What advice do you have for designers who have an idea and would like to turn it into a living, breathing product?

Jacquelyn De Jesu: Literally, just do it. Just go. An idea in the back of your notebook could be the next big thing! But, you'll never know if you don't start. So much of a successful product launch is reliant on building a great brand. Great design is the price of entry. So, know that as a designer you'll always have a leg up because that piece comes naturally to you.