This Product Will Change The Way You Shower 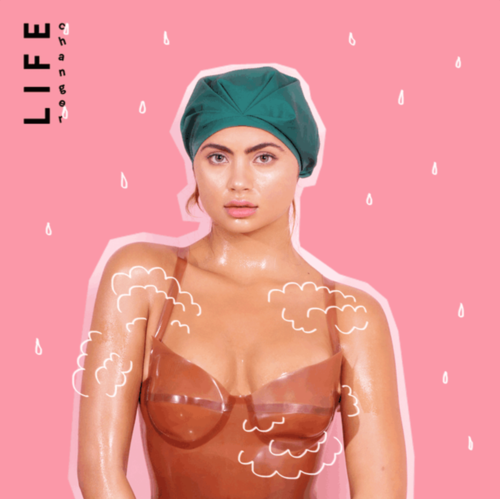 While some like to scoff at pop culture, we wouldn’t be who we are without it. Whether it’s a television show, movie, book, underground cultural phenomenon, or beauty product, there are certain events that changed the course of our lives. In our Life Changer series, we’re sharing the things that helped us become who we are today, and hopefully, inspire you to try them out for yourselves.

I never wash my hair more often than twice a week. After spending more than 20 years with a mane of thick hair that always reaches below my waistline (following one traumatizing haircut as a child), it has become a reality that I’ve accepted: There is just not enough time, or (shampoo cash) for that matter, to cleanse (and dry and style) my hair more frequently than that. Plus, over-washing has proven in the past to take a toll on my tresses, causing them to get oilier faster and my style to last less and less time between washes—something that my hairdresser has confirmed.

By using the disposable plastic caps I’ve occasionally taken from hotel rooms, I’ve kept my hair dry for special occasions, specifically ones that required the preservation of updos and blowouts. But those shower caps never held my full head of hair. I’ve even bought a cringeworthy shower cap or two in the past (that then proceeded to get moldy sitting in my bathroom because I refused to wear them after discovering that they gave me a sweaty hairline and forehead lines). But I never became committed to anything, because nothing really worked. Instead, I would pile my hair into a giant topknot and participate in a less-than-cute shower dance to avoid getting my head wet, in the process gaining what my S.O. has “lovingly” called a wet rat tail around the back of my neck.

When former advertising creative Jacquelyn De Jesu turned away from shampooing every day, she too was completely turned off by what she found on the market, namely tacky flower patterns, matronly polka dots, and antiquated ruffles. “I hated the thought of putting something on that made me feel like a frumpy grandma. I would rather have danced around the shower head trying not to get my hair wet,” says De Jesu. “I just wanted a cool shower cap, and they simply didn’t exist. That’s when I became obsessed with making a waterproof cap that we could actually feel great in.” Fast-forward to last year and De Jesu’s creation, SHHHOWERCAP, was born as a response to Grandma Ruth’s outdated hair cover.

Less a shower cap and more a seriously stylish waterproof turban—true story: my friend recently said she couldn’t pick between the NYFW-inspired Noir and the self-explanatorily-titled Yoncé because she didn’t know which one would look better when she wears it outside the house—SHHHOWERCAP is a departure from the tacky caps you’re more used to seeing on humorous birthday cards featuring grandmas and in old I Love Lucy-esque sit-coms, not only in terms of aesthetics but also technology. “The traditional shower cap was totally broken. I quickly learned that it was more than just looks. Women had so many issues with what was on the market, and I did my best to address everything I have heard.”

The fashion-forward pleated design uses a nanotech material which is 100 percent waterproof, water-repellent, and quick-to-dry; is machine washable, antibacterial (to prevent the aforementioned mildew), and humidity-, and thus frizz-, defying; and boasts a “back pocket” to accommodate all hair types and lengths, as well as a rubber gripper on the inner band for better hairline protection and no forehead indentations. “SHHHOWERCAP really is one of those things that you’ll never understand how you lived without until you start to use it,” says De Jesu. “We love hearing customers, who had never owned a shower cap before, tell us they now can’t live without it.”

She’s right. After first testing out the cap, I am officially hooked. The cap completely and comfortably fits over my head of hair (a feat in its own right), doesn’t feel like a plastic bag wrapped around my brain, and is entirely waterproof (I stood under a heavy stream of water to test it out—no wet strands or rat tails here). The best part: When I slide it off, it doesn’t yank on my hair and forehead, leaves my hair sweat-free, and maintains my blowouts looking unperturbed. I not only use mine during every ’poo-free session now but last week, I even stuffed it in my suitcase for a trip, despite knowing that there would soon be disposable ones at my convenience.

Inspired by fashion trends, there’s currently five styles available in the line (Joan Smalls and Kaley Cuoco are fans of the black-and-white Kent), including two brand-new fall additions that just launched today: The Envy, a vibrant emerald green style, and The Vibe, a deep citrine yellow one. “We heard that women wanted more solids, so we listened. [For these two styles,] I was inspired by the collections of Rochas and the dress Bey wore while smashing cars in Lemonade’s ‘Hold Up.’”

With hair washing on the decline and laziness on the rise, SHHHOWERCAP couldn’t have come at a better time to guarantee a good hair day every day—and it’s good news that the brand has no plans to slow down. “It’s been exciting to see how everyone almost immediately has a favorite. It’s either that or they can’t even choose just one,” says De Jesu. I might as well second that and add Envy to my cart already—and get one for my grandma while I’m at it.